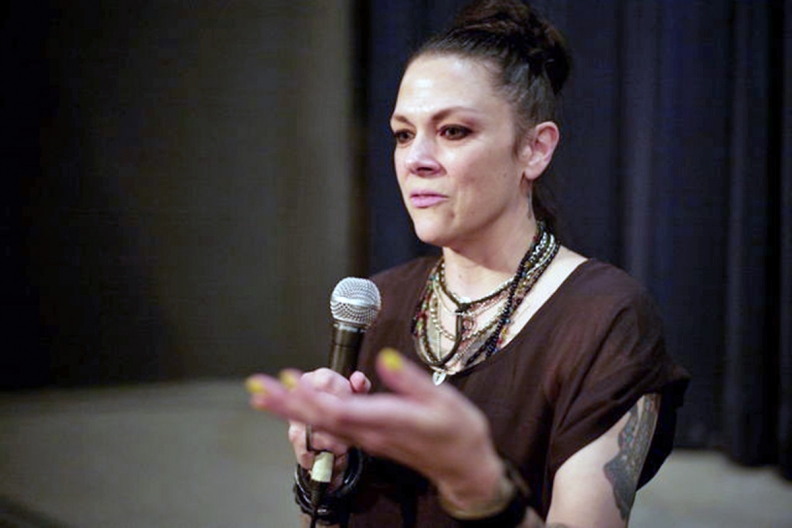 Reeder won at Oberhausen for “A Million Miles Away,” a 28-minute fiction about a choral conductor facing a personal trauma who substitute-teaches a class of snarky high-school girls.

An arrangement by UIC music graduate Jennifer Lennon of the Judas Priest song “You’ve Got Another Thing Comin’” launches an exchange between the conductor and the girls that gives the character new strength.

“I’ve been addressing teenage girls, specifically in the Midwest, in my last four or five films, using experimental forms to try to right some of those wrongs, and to make films that are for them, not just about them.”

Reeder has made more than 40 films and videos. She describes her techniques as “borrowed from after-school specials, amateur music videos and magical realism,” which she uses to depict people coping with emotional traumas.

A recent one — which she says will appeal to a lot of people — is “And I Will Rise If Only to Hold You Down.” It focuses on a divorcing couple and stars her friend Katherine Crockett, a principal dancer of the Martha Graham Dance Company.

“She’s a really beautiful dancer, but also a tremendous actress,” Reeder said.  “I’ll cast her again the next time I do a film with more adults than teenagers.”

Reeder’s work has been shown since the early 2000s in film festivals and solo screenings throughout Europe, including the Venice Biennale, and in many U.S. venues, including the 2000 Whitney Biennial.

“I think one reason why my films have been more popular overseas than in the States is that there’s not always a happy ending in them,” she said. “There’s some darkness or melancholy that I think European and Latin American audiences are more accustomed to, from their literature or the history of their politics.