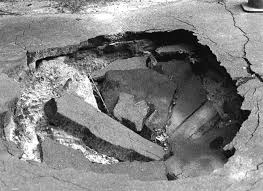 For her new exhibition opening Friday in Hallwalls Contemporary Arts Center (341 Delaware Ave.), artist Deborah Stratman has constructed what she calls “a temporary sinkhole museum.” The show, called “Swallows: Subsurface Voids,” is the culmination of Stratman’s recent Hallwalls residency, during which she collected and pieced together a wealth of information about sinkholes and their physical and psychological effects on the land and the population.

“Sinkholes have a direct, if ominous, relationship to the built world, provoking our implicit trust of foundations,” Stratman wrote in a statement. “For centuries they have been used as trash dumps, erasing waste tossed into their black hole, polluting groundwater resources with dubious health implications. Some civilizations have regarded sinkholes as sacred repositories, gateways to the afterlife, ritually tossing down golden artifacts and humans alike.”

In her research, Stratman visited and filmed two sinkholes in Louisiana. One, in Lake Peigneur, was created when a Texaco oil rig punctured a salt mine underneath the lake, creating a vortex that swallowed the drilling platform, 11 barges and 65 acres of terrain before spitting several of the barges back up.

Stratman, whose work has been shown in New York City’s Whitney Museum and Museum of Modern Art, the Centre Pompidou in Paris and the Hammer Museum in Los Angeles, is known largely for her film work. This exhibition, she said, is an effort to expand to new media in the pursuit of “a fresh way of telling.”