All Have the Same Breath: An Arts/Humanities Collaboration on Political Ecology 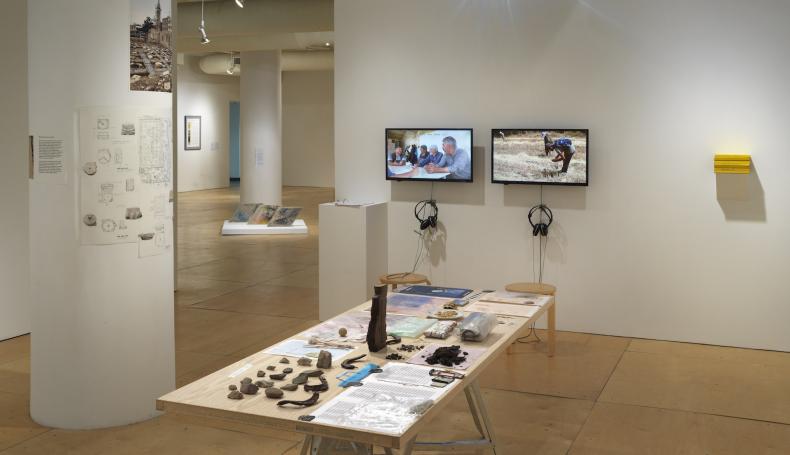 Image: All have the Same Breath Exhibition at UIC’s Gallery 400, curated by Karen Greenwalt. General view of “We Don’t Dig!” a mixed media installation by artist/researcher Bochay Drum and the Yalburt Yaylası Archaeological Research Project team. This installation intended to bring the fieldwork experience to the gallery space. It was built upon the experiences from the archaeological survey project in Turkey’s Konya province that explored Holocene and Anthropocene landscape histories and politics of water and cultural heritage.

Babylon is burning, and the planet is aching. Global climate change and the crisis of world ecologies, including the sixth mass extinction of biological species, are culminating in the current precarious moment in the history of the planet–and putting the livelihood of future generations at serious risk. Given Earth’s dire condition, it isn’t surprising that environmental scientists are looking beyond their discipline for help.  As the wide (and widening) scope of the problem calls for an expansive response, environmental scientists are pressing urgently for new forms of collaboration to address the deep future of the planet. What would happen, for instance, if artists, art historians, political scientists, designers, archaeologists, anthropologists, literary theorists, and scientists worked together to build a common way to engage with the politics of the environment? In the last two years, faculty and graduate students from CADA’s School of Art and Art History have been running just such a collaborative project, titled “Political Ecology as Practice: A Regional Approach to the Anthropocene,” in response to a research challenge posed by the Humanities Without Walls consortium, which is funded by the Mellon Foundation. My colleague Beate Geissler and I, both of us members of the faculty in the School of Art and Art History, were among the collaborating principal investigators of the project along with colleagues in English, anthropology, and biological sciences, while several graduate and undergraduate students from the art, art history, and interdisciplinary education in the arts (IDEAS) programs within the school took an active role in its various phases.

Yes, the ecological crisis is discussed in academic circles with an exceedingly global perspective, but for this project, we wanted to focus on the much more concrete politics of the environment in local places around the world, and to pay particular attention to issues such as the rising shortage of fresh water, local adaptations to the impact of climate change among agriculturalists and fishing communities, environmental immigrants, and notions of heritage in rural and urban landscapes. As a  project team, we thus strived to apply the most cutting-edge methodologies of engaging with such regional politics of livelihood, drawing on the research experience of faculty and graduate students at UIC and collaborating colleagues from the University of Wisconsin at Madison. From the outset, we sought to come up with an ideal toolkit of field methodologies in pursuing such research on the ground. What does an eco-critical arts/humanities/sciences collaboration look like when working toward an effective way of both documenting political conflicts over the environment and being self-reflexive about our impact on these ongoing conflicts? A diverse cohort of fieldworkers carried out experimental work in seven distinct field projects in seven locations: Bolivia, Cambodia, Pakistan, Turkey, and the United States, during the summers of 2017 and 2018. The strength of this work has been in its comparative nature, which became apparent in its final products: a major exhibition at Gallery 400 and a public symposium, both presenting the work of artists and researchers in the project. While the artists’ work dominated the exhibition space, audio-visual documentation of field research accompanied the artwork and placed the art installations in the larger context of the project. Similarly formal academic presentations in the symposium combined with artists’ statements and a panel among the artists to address how creativity and scholarly work can overlap in the study of the environmental conflicts.

In each of the seven projects, fieldworkers engaged with the distinct nature of their site, with the local history, narratives, and circumstances of the individual communities: the settled farmers and glaciers of the Hunza valley in northern Pakistan; environmental refugees in the historic neighborhood of Tarlabaşı in Istanbul, Turkey; the conditions of water and agricultural production around Cochabamba, Bolivia; refugee communities in Chicago’s vegetable gardens; industrial row crop farmers of northern Illinois; archaeological landscapes and disposed communities of Konya in west-central Turkey; and the fisheries impacted by hydropower dams and tree plantations in northeastern Cambodia.

Apart from the fieldwork, the first major gathering of the team was a workshop, or rather a “master class” with the world-renowned science and technologies scholar Bruno Latour of Sciences Po, Paris, in the fall of 2017. The weeklong master class had twenty-five participants, with faculty and graduate students from CADA (four artists and four art historians) forming a substantial component of the group. Inspired by Latour’s recently published book Facing Gaia: Eight Lectures on the New Climatic Regime, the master class produced working documents on the contemporary questions of climate change and the current status of scientific research among the public, and asked whether planet earth has a viable future in the Anthropocene – our newly proposed geological epoch, so named to highlight the impact of human activity on the environment, especially since the Industrial Revolution. This extraordinary exchange with the one of the world’s most prominent thinkers on climate change was valuable and productive for many participants of the master class, and it was an out-of-the-ordinary experience for any academic, a breathing moment from the always-packed schedules of everyday life in academia.

On January 18, 2019, the exhibition All have the same breath opened at UIC’s Gallery 400, presenting to the public works of art reflecting the productive outcomes of this arts/humanities collaboration. Curated by art history PhD candidate Karen Greenwalt, the exhibition showcased artists’ responses to the fieldwork. Borrowed from the book Ecclesiastes (3:19) of the Old Testament, where “breath” (hebel in Biblical Hebrew) refers to “the air we breathe, vapor, wind” as well as to “nothingness, futility,” the exhibition’s title proffered a metaphor-rich, double meaning that characterizes well the shared fortunes and misfortunes of living beings on the planet and acknowledges that all things – human, animal, vegetable, and mineral – depend on the same ecosystem and, indeed, breathe the same air. Rather than engage with the usual rhetoric of climate change, the artists featured in All have the same breath raised pressing questions about how the global environmental crisis is experienced and articulated. Exploring the ancient ghosts of the past and engaging with the politics of current ecologies, All have the same breath investigated and visualized the material entanglements, debates, discourses, and intellectual engagements of the Anthropocene in a variety of urban and rural environments.

More specifically, the participating artists responded to, engaged with, and gave visual expression to place-based field research, showcasing the results of an unorthodox collaboration between artists and other researchers in thinking about  care for the environment and its multispecies communities through field practice. The exhibition presented artworks in media ranging from experimental and documentary video installations to sculpture, from unorthodox displays of geological specimens to assemblages of materials and ephemera from the field (field notebooks, drawings, photographs, plant and material samples, etc.), bringing the experience of fieldwork to the gallery space. Finally, the two-day symposium at Gallery 400 in March 2019 engendered a broader reflection on the project’s two years of collaborative process and solidified ideas for a book on our work, an upcoming publication that will document both the research and art production of the project, from Bruno Latour’s master class to the results of the fieldwork and the works of art.

The All have the same breath exhibition and symposium proposed a new kind of visuality for the Anthropocene. The field research carried out under the rubric of environmental ethnography, political ecology, landscape archaeology, and eco-critical art practice, employed in this project, moves us away from obsession with the singular, Galilean object, or the singular historical event, through which stories of human progress are commonly told. In contrast, this project moves us closer to expanded visions of ecology, breathable atmospheres of shared life, interdependent lives of multispecies communities, their entangled bodies, and the deep time of the past and the future, “place-based politics of Gaia.” All have the same breath has shown us that to change our lives we must change the way we tell our stories.